You are here: Blog / Archives for place

I spent yesterday thinking about these words of Wendell Berry, from his 1968 essay, “A Native Hill”:

I had made a significant change in my relation to the place: before, it had been mine by coincidence or accident; now it was mine by choice. My return, which at first had been hesitant and tentative, grew wholehearted and sure. I had come back to stay.

My wife and I took a magical little walk (just an hour or so after I had written this post!) in a part of town unknown to us and I thought about happy we were to be back here, in the place that suits us, walking and exploring and just living our lives. “Some are born in their place, some find it, some realize after long searching that the place they left is the one they have been searching for.”
—Wallace Stegner, “The Sense of Place” There’s a very romantic American story that I love, that lots of artists who are young and starting out love, too, and it goes like this: Move to the Big City with nothing, make friends, make art, struggle, but make it. That’s the kind of story told in Patti Smith’s wonderful memoir, Just Kids. The trouble with this story is that people remember the place (New York) but they don’t remember the conditions. Here’s Patti Smith herself on NYC nowadays:

It certainly isn’t the place I knew when I was young?—?we had no money, the city was bankrupt, it was filled with cockroaches, a lot of rats, it was a bit gritty, and it was cheap to live here, really cheap. You could have a bookstore job and a little apartment in the East Village. There were so many of us, so many like minds. You can’t do that now.

(Emphasis mine.) She continues:

I can’t speak for new generations because they probably have their way of negotiating all of this, but I can just say it doesn’t welcome people that have very little, that just want to get a little job and have a little practice place to play with their band. I mean, all of my band left New York because they couldn’t afford to live there. We lost our practice place. I lost my art studio because all of our spaces were taken by entrepreneurs with a lot of money. But it’s still a wonderful city, a great city, it’s just, I guess, if you’re scrappy you have to find a new way to get around in it.

In another talk, Smith suggested that young artists might be better off finding a new city:

New York has closed itself off to the young and the struggling. But there’s always other cities. I don’t know?—?Detroit, Poughkeepsie, Newark. You have to find the new place because New York City has been taken away from you. It’s still a great city, but it has closed itself off from the poor and creative burgeoning society. So my advice is: Find a new city.

This is pretty much what I was trying to say a few days ago, when I posted a series of Tweets that I thought were fairly uncontroversial, not to mention unoriginal:

No, it’s not necessarily the most glamorous option. (I’m remembering a line from Anne Trubek’s piece about living a low-overhead in the Rust Belt: “I imagine that many would rather be in debt than live in Northeast Ohio.”)

People, many of them strangers thanks to retweets, had a range of responses, some saying ridiculous things like, “You live in Austin asshole you’re just old and broke and bitter and worried about young people taking your job” (???) to thoughtful, important replies like, “I’m trans, so I need to live somewhere progressive so I feel safe day-to-day and don’t feel like I’m going to get beat up for using the wrong restroom.”

I realize now when I said “young folks” I meant young artists and poets and other creative people who were like me about ten years ago: poor, or not wealthy, trying to figure out where to live, and wanting to do something weird and interesting that doesn’t necessarily fit into a traditional model. Not: get a job at a tech company, get big art world gallery shows, etc. There’s lots of talk about how the internet is making it possible to live anywhere these days and do their own thing. But I think people my age and younger forget the fact that people made their own scenes even BEFORE the internet. That’s why I love books like Our Band Could Be Your Life, which show how people got together, did their own thing, and built their own networks and businesses, all with not much more than a Kinko’s, a telephone, and the US postal service.

The idea is that you live somewhere cheap, keep your overhead low, make whatever work you want to make, create your own scene. Nobody gets super-rich or super-famous, but dammit, they get to live their lives their own way, unbeholden to anybody.

That, to me, is one of the most inspiring American storylines. It’s not for everybody, and there are plenty of arguments against it, but I think it’s the one that’s the most realistically within reach for a lot of us. Texans are a lot like Catholics: it’s the converts who are the most fervent believers…

“Maybe it hadn’t been a community, but it had been a place. Now there weren’t any places left, just separate houses with separate televisions and separate telephones and less and less dropping by.” Sometimes I think it’s helpful to step back from the things you’re reading, the influences you’re absorbing, and have a look at what threads they have in common, and then try to figure out why they’re resonating with you and what it means. So much about life is timing, and sometimes things just magically gel together. Sometimes the link is really dumb and arbitrary, but ends up revealing something.

For instance, two of my favorite contemporary artists right now are both from the Midwest, work in short, almost sketchy forms, and are named some form of “Anders.” ANDERS NILSEN writes/draws comics. His stuff appears in MOME, D+Q, and his own series, BIG IDEAS. He has a new book coming out, called MONOLOGUES FOR THE COMING PLAGUE. Here is a nice long interview with him, in which he says:

Why comics? I think when I went back to comics it was because, as a kid comics were the art form I identified with the most keenly. They say if you don’t know what to do with your life, try to remember what you loved most when you were twelve and do that.

When asked why so many cartoonists live in Chicago, he responded:

I really have no idea. It’s been suggested that comics may be in some way particularly suited to the Midwest, but I can’t quite recall the reasoning. Humility. A lot of time inside in the winter, might as well draw. The protestant work ethic. A distrust of/lack of entre into the bi-coastal Cultural Establishment. How do those sound? Comics is definitely not about impressing people. which I would say is a kind of midwestern characteristic. We tend to not be very impressive. All those skyscrapers downtown were built by East-coasters and Europeans. 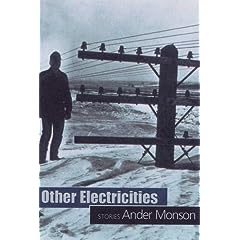 ANDER MONSON writes short stories and poems, teaches in Michigan, and edits THE DIAGRAM. His book of poems, VACATIONLAND, and his novel-in-short-stories, OTHER ELECTRICITIES, are about Michigan’s Upper Peninsula, where he grew up. A great interview with him is here.
He has this to say about writing your home:

I can only think that the place in which you grow up has a significant effect on you. How can it not? Growing up in Michigan’s UP — with its history of boom and bust, of the rise and the fall of the mines, with its 6-month winters, and with the constant presence of tourism (the UP as a place in its way devoted to visitors, not to its residents) — has turned my work somehow. I’m interested in loneliness and in isolation, in the effects of living under extreme weather, and how those who choose to live there bear it. Of course they love it, or they wouldn’t live there (though many of them have no choice, have never gotten out). I’m gone from the place now, living ten hours away downstate, but even when I lived in Alabama, I thought of snow.