You are here: Blog / Notes on writing and drawing / AN ARTIST NOT-IN-RESIDENCE A Saul Steinberg doodle on Smithsonian letterhead, from an article in The Smithsonian:

In 1967, then-Secretary of the Smithsonian S. Dillon Ripley invited Saul Steinberg to serve as the Institution’s first and only artist-in-residence….

The job description for the post—which included a then-generous stipend of $11,000—was imprecise; even the length of tenure was vague, although Steinberg, in a December 1965 letter to Ripley, spoke of staying “for at least 6 months or perhaps a whole year.” In fact, the artist remained in town less than four months, working out of a comfortable rented town house rather than the office provided for him. A January 1967 Washington Star headline told the story: “Smithsonian’s Steinberg: An Artist Not-in-Residence.”

But despite this aloofness and a sincere dislike of Washington—a city Steinberg would later describe in the pages of this magazine as having “ready-made art, bland townhouses of Georgetown, goody-goody churches, a completely American kind of city planning”—the artist delivered fair value for Ripley’s largesse.

Steinberg drawings often incorporate found graphics such as official-looking seals and rubber stamps and coin rubbings, so it was pure serendipity that the Smithsonian letterhead at the time included an engraving of the Institution’s signature building, the James Renwick-designed structure known to this day as the Castle. Steinberg had predicted that when he got to Washington, he would “feel my way along and decide then what to do.” The solution was quickly at hand: the stationery would constitute his sketch pad, and the letterhead would become an integral element of each drawing. By the time the artist headed back home to New York City, he left behind, according to Joann Moser, a senior curator at the Smithsonian American Art Museum (SAAM), a total of 36 drawings, “everything done on that stationery.”

Some of these pieces were in the Illuminations show and book: 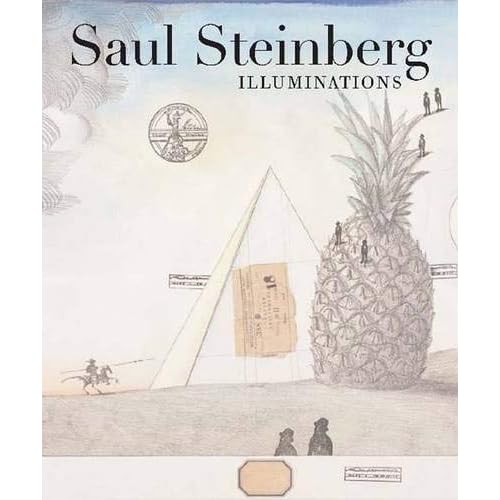