You are here: Blog / Archives for ghoulardi

“As I got older…I kept thinking, ‘What is this Ghoulardi thing? What is it? What? What?’ We went back to Cleveland once when I was 14 and we were mobbed at the airport by people chanting ‘Ghoulardi! Ghoulardi!’ And when I do interviews anywhere in the country, constantly, constantly, people who are enamored of my father or who grew up with him bring him up or even thank me for Ghoulardi!”

WMFU’s Beware of The Blog! beat me to the punch:

Cleveland’s most legendary horror host was unmistakably Ghoulardi. He was only on the air for about three years (63-66), but he left an indelible impression. His real name was Ernie Anderson, and after retiring Ghoulardi, he moved to Hollywood and become a legendary voice-over artist (he was the voice of The Love Boat, the Carol Burnett Show, and pretty much every top 40 radio station). He is also the father of none other than director Paul Thomas Anderson, who pretty much based the Philip Baker Hall character in Magnolia on him.

But most importantly, Ghoulardi used that booming, commanding voice to unleash an anarchistic spirit. Rather than just play bad movies and make jokes, he began setting up blue screens and dropping in random images over the top of the film, or making strange noises over the soundtrack. And things weren’t any better outside of the movie, where his set could be pure chaos. He was topical, he was funny as hell, he was just plain weird, he WAS the counterculture invading the average middle-American’s television. Nobody that saw a Ghoulardi show ever forgot it, and in a way he shaped the weird climate of Cleveland in the late 60s and early 70s. David Thomas of Pere Ubu was one of his disciples and describes watching his show as such:

“Everyone who saw Ghoulardi will tell a favorite story – like the night he set off a egregiously large home-made explosive device sent it by a fan – he was always setting off fireworks and blowing up things in the studio – and quite clearly off-camera crew were telling Ghoulardi not to light it up and you could see people running across the studio, the camera abandoned to skew off balance, pointing at the floor, and then the entire room was stunned senseless for some minutes… live… smoke, curtains on fire, people stumbling around…”

And of course I have to note that my future father-in-law (two months!) wrote the book on Ghoulardi (literally), and that you should buy it: 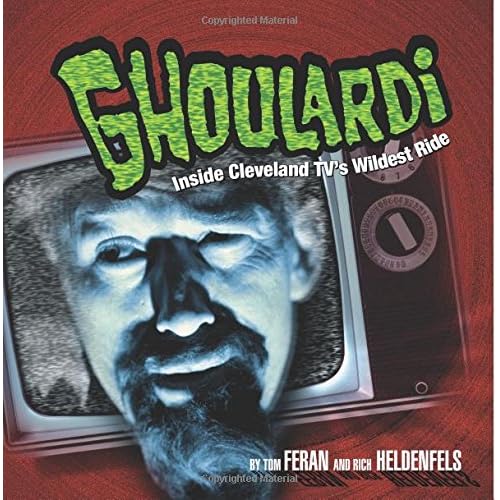